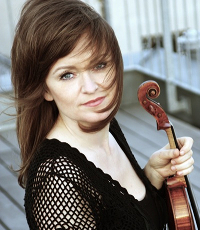 Birgit Kolar was born in 1970 in Waidhofen/Ybbs (Austria) where she began to study the violin at the local music school at the age of six.

From 1982, she studied at the University of Music in Vienna with the concertmaster of the Vienna Philharmonic Orchestra, Rainer Küchl, and his assistant, Jela Spitkova.

She pursued her studies with Wolfgang Schneiderhan in Lucerne, Robert Masters in London and Josef Luitz in Vienna.

From 1999 to 2008, Birgit Kolar played as 1st violinist of the "Münchner Streichquartett", with members of the "Symphonieorchester des Bayerischen Rundfunks".

In 2009, she founded the "Seraphin Quartett Wien" with members of the Vienna Philharmonic and the Vienna Symphony Orchestra.

She is regularly invited from the Vienna Philharmonic Orchestra and the Toyota Master Players as a guest violinist.

From 2003 to 2011, she was an assistant teacher at the University for Music in Vienna. In 2011, she was guest professor at the "Kunstuniversität" in Graz (Austria).

Since March 2012, Birgit Kolar has been concertmaster of the "Orquesta Nacional de España".

Birgit Kolar plays a violin Carlo Bergonzi 1723 from the collection of rare instruments owned by the National Bank of Austria.

Obviously, the main theme is audition preparation. But above and beyond that, I try to respect the needs of each individual participant.  It seems very important for me to give to students a way to approach an audition or a way to practice that is centered on personal responsibility. A teacher’s role should be to advise, support and challenge their students but a student should find and make their own personal way.

My purpose for this course is to try and incorporate this philosophy in my teaching and to help the musicians prepare as well as possible on an instrumental and musical but also, on a personal level.