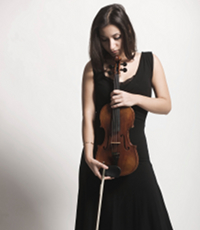 Mariam Margaryan-Petkova was born in 1979 in Yerevan (Armenia) where she started to study violin at the "P. I. Tchaikovsky" Music School at the age of six. Further studies followed at the State Conservatory "Komitas" with Bagrat Vardanyan and at the University for Music and Performing Arts in Vienna with Prof. Gerald Schubert where she graduated with honors.

Mariam Margaryan-Petkova is the recipient of grants from the AGBU Foundation in New York, the Yahubian Foundation in Vienna and the Austrian Ministry for Education, Arts and Culture.

At the age of 9 already, she was a member of the Armenian Youth National Orchestra. She gathered further orchestral experience with the Chamber Orchestra Serenade (1997–1999), the Verbier Festival Youth Orchestra (2000 and 2001), the Lower Austrian "Tonkünstler" Orchestra (2005-2007) and the Radio Symphony Orchestra in Vienna (2007).

As soloist and chamber musician, she has performed in Armenia, Russia, Switzerland, Germany, France, Italy and Austria. She celebrated her debut in Vienna’s "Musikverein" in 2008 and in the "Konzerthaus" in 2009 with a quartet evening with Rainer Küchl.

Her varied musical activities have given Mariam Margaryan-Petkova the opportunity to work with such renowned musicians as Riccardo Muti, Zubin Mehta, Pierre Boulez, Daniel Barenboim, Nikolaus Harnoncourt, Gustavo Dudamel and Placido Domingo among others. She has also cooperated with the Armenian composers Aleksander Arutyunian and Edward Mirzoyan.

Mariam Margaryan-Petkova is a member of Ensemble "VENIA" and a founding member of the ensemble "eNikMa".