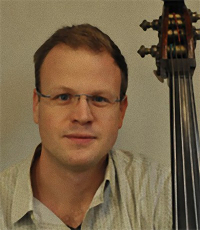 Jędrzej Górski was born on April 29, 1981 in Toruń, Poland and received a well-grounded musical education until he was 17 in his hometown through cello and piano lessons in the "Karol Szymanowski" Music School beginning in 1987; contrabass lessons at the "Karol Szymanowski" Music High School from 1993; and studies at the "Nicolaus Copernicus" Lyceum from 1995. In 1998 he switched to the "Artur Rubenstein" Music Lyceum in Bydgoszcz, where two years later he received his matura with a "very good" in his major subject. The next phase of his musical education took him to Germany. Between 2000 and 2003 he studied contrabass at the "Robert Schumann" College in Düsseldorf with Wenancjusz Kurzawa and chamber music with Jürgen Kussmaul and Claus Reichardt. He then joined the contrabass class of Dorin Marc at College of Music in Nürnberg, where he also graduated with a "very good" in 2006.

Naturally his instrumental study was complemented with work in chamber music groups and orchestral experience. Thus Jędrzej Górski attended the Orchestra Academy of Nordrhein Westfalen, as well as that of the Munich Philharmonic, belonged to the German Chamber Academy in Neuss am Rhein and gave concerts with the contrabass quartet "Bass Partout". In the season 2007/07 he had a temporary contract with the Munich Philharmonic, and at that time studied privately with their solo contrabassist Sławomir Grenda. In May 2007 he auditioned successfully for the Vienna State Opera Orchestra and since September 1, 2007, has been a member of the contrabass section. Since 2010 - membership in the Association of the Vienna Philharmonic.