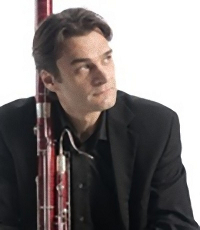 Born in Graz, Austria. He began to play bassoon 1980 at the conservatory in Graz with Johann Benesch. In the years 1984-1988 he continued his studies with Milan Turkovic at the "Mozarteum" in Salzburg.

He won several prizes at national and international competitions as there are for example "Jugend musiziert", "Musica Juventutis", "C. M. v. Weber Wettbewerb" in Munich or IDRS Competition in Manchester.

Since september 1987 he is principal bassoonist at the Vienna Symphony Orchestra.

Since 2010 he is a member oft he "Wiener Kammerensemble" and also in 2010 he succeeded Milan Turkovic in the Woodwind Quintet "Ensemble Wien-Berlin".

As a soloist he played in Austria, Germany, Switzerland, England, Norway, USA, Southamerica and Japan in collaboration with conducters as there are for example Gorges Pretre, Rafael Frühbeck de Burgos, Wolfgang Sawallisch, Vladimir Fedosejev, Leopold Hager and Andrea Marcon.

In 1994 he started teaching at the "Mozarteum" in Salzburg and since 2004 he is Professor at the University of Music and dramatic Arts in Vienna.