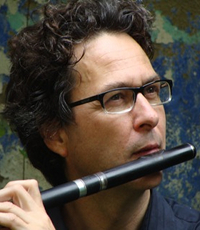 Albert Mora was born on 3rd of August 1961 in Barcelona (Spain).

Since 2002 he has a professorship for flute and chamber music at the University for Music “Escola Superior de Música de Catalunya” (ESMUC) and at the Orchestra Academy of the Gran Teatro del Liceu.

Albert Mora started to study the flute in his home town Barcelona and went on with Prof. Paul Meisen at the Hochschule für Musik München and graduated his studies with honors.

He received other important artistic impulses from Jean-Pierre Rampal, Aurèle Nicolet, Barthold Kuijken and the pianist Gyorgy Sebök and was active participant at the master classes of Sergiu Celibidache for many years.

Cd-, radio- and television recordings as well as a soloist and chamber musician.

The purpose of this course is to give the students as many impulses as possible in a short time with regards to a successful participation in an audition.

For students who are not interested at audition preparation at the moment, the emphasis will be on technical aspects or on repertoire as required.