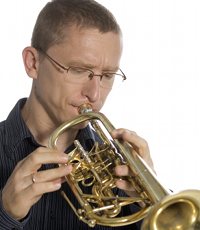 Heinrich Bruckner was born in Vienna in 1965. His introduction to music began with recorder and piano.

After initial private trumpet tuition, he commenced formal trumpet studies at the Conservatorium of Music, Vienna, with Prof. Richard Schwameis and Prof. Karl Brugger. In 1985 he was awarded the Bachelor of Music Degree with distinction.

After graduating from the Conservatorium of Music, Vienna, Heinrich Bruckner continued studying trumpet with Prof. Josef Pomberger at the University of Music and Fine Arts, Vienna.

Heinrich Bruckner has been the recipient of several awards from the institution "Jugend musiziert". In 1981 he was awarded third prize in the Helmut Wobisch memorial competition.

At the age of 16 he received his first professional engagement as a member of the Austrian State Theatres. In 1987 he became principal trumpet with the Vienna Symphony Orchestra.

Since 1984 Heinrich Bruckner has been a member of the internationally renowned brass quintet "Art of Brass Vienna". With this group he has released numerous recordings with repertoire ranging from Bach to Gershwin and Ellington. "Art of Brass Vienna" have also toured extensively throughout Europe, the Middle East, Scandinavia, South America, China and Japan.

In 1995 Heinrich Bruckner was appointed guest professor for brass chamber music at the University for Music and Fine Arts, Vienna.