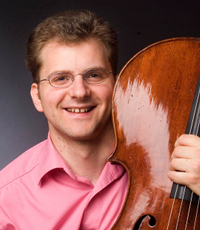 Stefan Gartmayer was born in Vienna on March 8, 1974, and in 1981 began his study of the cello with Hedy Feierl at the Vienna Conservatory. In 1986 he was awarded first prize at the "Jugend musiziert" competition. Following his graduation from the Schottengymnasium in 1992, he enrolled in composition at the Vienna College of Music under Dietmar Schermann and Dieter Kaufmann, as well as in cello performance with Tobias Kühne, completing his diploma with distinction in 1996. In the 1999/2000 season he was principal cellist with the Vienna Radio Symphony Orchestra, assuming the same position the following year with the Frankfurt Radio Symphony Orchestra. Beginning in 2002 he was a member of the Gewandhaus Orchestra in Leipzig. Following a successful audition, Mag. Stefan Gartmayer entered into the service of the Vienna State Opera Orchestra on April 1, 2007.

Even during his student years, which he supplemented with additional study in Brescia, Aachen and Freiburg, Stefan Gartmayer appeared as guest soloist in numerous concerts with such orchestras as the Vienna Chamber Orchestra, the Bruckner Orchestra in Linz, and the "Hochschulinfonietta Vienna" under the baton of Helmut Zehetner. These appearances served as confirmation of the many prizes which he had already won in the course of his career, such as the 5th Vienna International Music Competition 1995, the International Beethoven Competition in Hradec 1997, and the International Cello Competition in Osaka 2001. Stefan Gartmayer has also shown himself to be a multi-faceted musician who feels equally at home with in the Baroque era, with the "Bach Orchestra of the Gewandhaus in Leipzig", and with contemporary music, having played with the "Ensemble Avantgarde Leipzig" and René Staar's Ensemble "Wiener Collage").