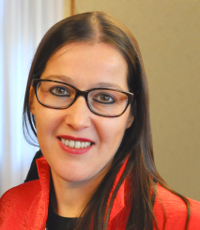 
Gabriele Proy (born 1965 in Vienna) is a leading Austrian composer and pioneer in the field of soundscape composition. She graduated with distinction at the Vienna University of Music and Performing Arts, where she studied composition with Erich Urbanner, electro acoustic composition with Dieter Kaufmann and instrumental education for guitar with Gunter Schneider.

From 1999 till 2013 she was the President of the European Forum Klanglandschaft. She has been invited to give lectures and concerts at universities in Europe, Australia, Japan and Canada. She has taught at the Krems Danube University and the University of Vienna, and since 1999 has been guest lecturer in composition and sound design at the Nuremberg Media Academy. Since 2011, she has taught composition at the Vienna Institute for the International Education of Students.

Her music has been performed by many distinguished ensembles (including the Koehne Quartet, the Munich Philharmonic Chorus, the ORF Vienna Radio Symphony Orchestra, the ensemble die reihe, the ensemble Wiener Collage and the Vienna Concert-Verein Orchestra).

Her works have had successful performances in Europe, Turkey, Iran, Japan, Australia, Canada, Latin America and the USA.