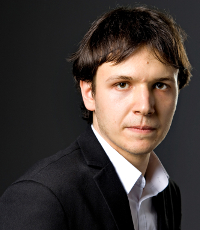 Dominik Derler - born on  26.Februar 1993 in Vienna -  is an austrian composer, who learned the composing with 13 years by himself. Since then he composed many works (sonatas, nocturnes, waltzes etc.) - mostly for piano - which he performed mostly himself on different events, also during his student time. When he was 17,  he made his first experience with jazz, where he had the opportunity to improve his solistic pianistic skills, which he mostly developed himself without music sheets. In this case the most important role played the jazz pianists, such as Oscar Peterson, Art Tatum und Marian Petrescu. By this experience the composer chaged his esthetic - compositional works from this period and "updated" them, accepting a new distinctive personal esthetic value attitude.

Derler follws, despite of his admiration for so many artists, his own musical style. His catalogue of works includes cycles of works, which he wrote as a result of different inspirations in his life. The composer retains in his whole oeuvre both his own creative - musical and philosophical thoughts.

He has the ability not only to play the jazz piano, but also to improvise in different classical genres. His improvising art is mostly fixed on the spontaneous creating of Nocturnes and Fugas, whereby he attributes the more important role to the first.

Presently Derler studies at the University of Vienna Philosophy an dPsychology. In the same time he is acting there also as a tutor. To promote philosophical and psychological thoughts in his tonal and atonal works plays for him an essential role.

Personal attitude to the music:

"The music should help other people resp. it  should  give them something."