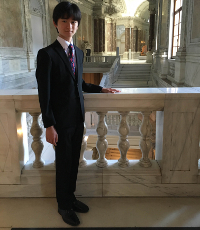 Hibiki Kojima was born in 2001 in Gunma (Japan) where he started learning piano at age of six. His formal education started with prof. Shoko Kazaoka and prof. Gen Segawa. He attended master classes with Andrea Padova, Ivan Donchev, and Yukio Yokoyama.

In Jun 2013, he gave his first solo recital in Isesaki-city (Japan). In July in the same year he started studying in music school in Vienna.

He has given solo recitals in Tokyo, Kanagawa and Gunma in summer in 2014, at Takagi Klavier Salon (Tokyo) in April and December 2015, in Fujioka-city (Japan) in January 2016, and at Okurayama Memorial Hall (Yokohama) in August 2016.

He also plays piano to Kindergarten pupil in Gunma, to teach enjoyments of classical music.

Currently he is learning with prof. Paul Gulda and studying at Musikgymnasium Wien. He is also interested in Jazz and Pops, and has been composing music since he was six.

From 2011, he has cultural exchange with embassies in Japan as a chief of “Little Ambassadors” organized by IWCJ Foundation.

He has composed music which is inspired by Egypt and presented to the ambassador of Egypt in Japan and it was posted on “Al Ahram Newspaper”. In May 2013, he was interviewed by TV in Egypt when he visited the country.

After returning from Egypt, he has performed the composition “Egyptian suite” at the Symposium of the World Historical Cities League. More than 100 of parties of Egypt and Japan have listened to it attentively.