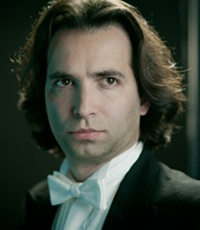 Pablo Boggiano was born in Buenos Aires, Argentina. He studied conducting at the national conservatory "Lopez Buchado" with Mario Benzecry and at the Argentinean Catholic University. During his studies at the age of 18 he made his debut at the cathedral of Buenos Aires with the requiem of Faurè. Two years later he was invited to work as an assistant of Mario Benzecry with the Orchestra Libertador San Martin.

He participated in several master classes including lessons with Prof. Berau, a former student of Messiaen. As prize winner of international competitions he had the opportunity to conduct orchestras such as the Orchestra Boréal in Paris and the chamber orchestra of Teatro Argentino de La Plata.

2003 he was invited by Ivan Fischer to work with the Budapest Festival Orchestra during a tour in Buenos Aires.

In June 2009 he conducted the European premier of the Opera Tango "Mateo" written by Martin Palmieri with the Symphonic Orchestra of Bratislava.

During the season 2010/2011 he worked at the Opera House from Burgas and Russe (Bulgaria), and performs Rigoletto, Traviata, Don Giovanni and Carmen.

In Taiwan was invited to work with the Traditional Symphonic Orchestra from Taipe.

Since 2009 he works with the choir and Orchestra Wiener Tonkunstvereinigung. Since 2003 he works as permanent conductor of Orchestra "Musikverein Pressbaum" in Vienna as well as choirmaster of the "Kirchenchor Groß Enzersdorf" and the choir of Lateinamerika-Institut (Austria).

Invited to work with the Symphonic Orchestra Buenos Aires since 2010, and with the Philharmonic of Buenos Aires during the season 2013.

In 2012-2013 he performed 10 Presentation The Magic Flute in Theaters of Niedereösterreich (Austria).

During 2012 he will work with the violinist Florian Zwiauer (Concertmaster form de Vienna Symphonic).

Invited by Gustavo Dudamel to work in the season 2013/2014 in Venezuela.

He had an excellent debut with the Philharmonic Orchestra of Budapest in January 2013, in the OPERA from Budapest.

In June 2013 he had debuted in the Famous Cadogan Hall with The Royal Philharmonic Orchestra of London.