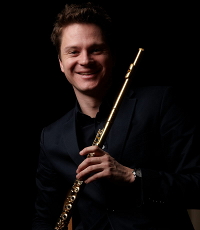 
Karl-Heinz Schütz is Principal Solo flute with the Vienna State Opera Orchestra and plays the solo flute at the Wiener Philharmoniker. From 2005 to 2011 he held this position at the Wiener Symphoniker. He is Flute Professor at   Conservatorium Wien-University.

Born in Innsbruck and grown up in Landeck/Tirol he has had his musical education in Austria, Switzerland and France. He graduated both, in Austria with Prof. Eva Amsler at the Vorarlberg State Conservatory, and in France within the class of  Prof. Philippe Bernold at the  Lyon CNSM (Conservatoire national supérieur de musique), where he also perfected himself in playing chamber music  with Jean-Louis Cappezzali. In Switzerland, he had numerous and very impressing private lessons with Aurèle Nicolet.

Before his nomination to first Solo flute in Vienna, he held the same position for four years at the Stuttgarter Philharmoniker and taught at the Vorarlberg State Conservatory from 2000 to 2004.

He has been an asked guest musician with prestigious orchestras such as Orchestre de la Suisse Romande, German Radio-orchestras NDR Hamburg, WDR Cologne and HR Frankfurt, Opéra de Lyon, Orchestra of the Bayreuther Festspiele and Super World Orchestra in Japan.

Both as a soloist and as a chamber musician he travelled to numerous important festivals in several countries in Europe, Asia, North and South Amerika. He is a regularly invited guest Professor to international music camps, master classes etc., for example in Seoul-Korea, Academie de Nice, Liechtensteiner Meisterkurse, Bludenzer Meisterkurse, Akademie der Bregenzer Festspiele, Akademie Fiss and the PACIFIC MUSIC FESTIVAL in Sapporo Japan among others.

Permanent music making in diverse chamber formations allows him to enlarge his repertoire permanently, that reaches from the Barock to the Avantgarde. He is a member of the DORIAN CONSORT, the DOREMIS-ENSEMBLE-WIEN.