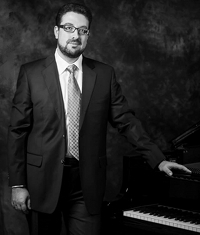 
Nikolay Petkov was born into a famous family of musicians in 1978 in Plovdiv (Bulgaria) where he started learning piano with Prof. Stella Osslekova at the age of four. His formal education started in 1988 with Prof. Osslekova at the music high school "Dobrin Petkov" in Plovdiv, and with Prof. Georgi Kanev, Prof. Miroslava Serafimova-Manolova (Academy for Music, Dance and Arts Plovdiv) and with Prof. Milena Mollova (Conservatory Sofia). In 1995, he became the youngest student at the University of Music and Performing Arts in Vienna where he studied with Prof. Noel Flores and Prof. Stefan Arnold and successfully completed his Masters degree in 2004.

Nikolay Petkov is the recipient of numerous grants and prizes at competitions such as the "Svetoslav Obretenov" National Competition, the National Academy Competition in Plovdiv, the "Dr. Martha Sobotka–Charlotte Janacek" Foundation and the grant program of the Ministry of Education, Arts and Culture in Vienna.

Since 1985, Mr. Petkov has given recitals and performed both as a soloist with orchestra (i.e., with the Philharmony "Bulgaria" in 1987 and the Chamber Orchestra of the Bulgarian-French Association in 1990) and as a chamber musician in Bulgaria, Germany, Hungary and Cyprus. Between 1996 and 2012, he has worked as pianist, accompanist, piano teacher and assistant in the Vienna Children's Opera at the "Konzerthaus". In 2005, he was pianist at the Opera Workshop Vienna as well as in the musical "Odysseus Goes Mad" in the ORF Klagenfurt. He is a regular guest performer with the "Tonkünstler" Orchestra of Lower Austria since 2007 and he has been also a member of the GK Film Orchestra since 2013.

Nikolay Petkov is a member of Ensemble "VENIA" and founding member of the ensemble "eNikMa".

Recordings with the ORF, the BNR and the BNT.