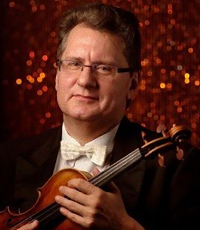 Mitcho Dimitrov is an accomplished musician with a large and versatile experience as a soloist, concertmaster and leader of chamber music ensembles. At the age of ten, the violinist first received recognition when he won First Prize at the "Yaroslav Kocian" International Competition (Czech Republic). He is a graduate of the Music School in his hometown of Plovdiv (Bulgaria) under the distinguished pedagogue Tatiana Krasteva. Prof. Boyan Lechev (violin) and Prof. Vladimir Avramov (chamber music) – his tutors at the "Pancho Vladigerov" National Academy of Music in Sofia (1974-1980) - had a crucial impact on Mitcho Dimtrov’s artistic development. In 1980, he began a specialization under the world famous Prof. Yfrah Neeman at the Guildhall School of Music and Drama in London. Upon completion of his post-graduate studies there, he was honored with the highest acknowledgement – The Concert Recital Diploma. During his three-year stay in the UK, Mitcho Dimitrov was a part-time violin and chamber music lecturer at the Richmond College. He also had numerous performances in Oxford, Cambridge, Richmond, Weybridge and London. After his return to Bulgaria, he became a concertmaster of the Plovdiv Philharmonic Orchestra and subsequently, a full time lecturer at the Plovdiv Academy of Music, Dance and Fine Arts (1983-1988). Since 1988, the violinist has lived and worked in the Netherlands. During the same year, he became a concertmaster of the Hilversum Radio Symphony Orchestra and since 1989, concertmaster of the Netherlands Radio Philharmonic Orchestra. In addition, Mitcho Dimitrov is leader of the Ardis Chamber Music Ensemble, with which he performs across the country and makes recordings for the Dutch Radio.

Mitcho Dimtrov is a winner of the following international awards:

He also had numerous appearances in established international festivals such as the Varna Summer International Music Festival, the Sofia Summer Festival, the Bratislava International Music Festival, the Plovdiv Chamber Music Festival and the European Month of Culture – Plovdiv (1999). He has toured Hungary, Serbia, Croatia, Germany, Romania, Poland, Armenia, Czech Republic, Slovakia, France, Spain, Austria, Switzerland and Cuba. His appearances in the Netherlands include many charities for Bulgarian social projects. The violinist has had concerts in one of the most renowned and well-established concert-halls in the Netherlands: the Concertgebouw (Amsterdam), De Doelen (Rotherdam), the Second Chamber of the Houses of Parliament (the Hague). In recent years, Mitcho Dimitrov has toured extensively across the Netherlands together with the pianist Corrie Bruenzeel, placing special emphasis on Bulgarian music. Mitcho Dimitrov’s 35-year-long career in the field of music and the 30th anniversary of his artistic collaboration with the pianist Violeta Popova were celebrated with a series of concerts held in Plovdiv in 2004. Mitcho Dimitrov holds masterclasses in Plovdiv and Sofia annually. He is a permanent member of the jury of the National violin competition "Pantcho Wladigueroff" in Shumen and International competition "Young Virtuoses" in Sofia. Since 2010, Mitcho Dimitrov also gives violin lessons at the Folkwang Universität der Künste in Essen.