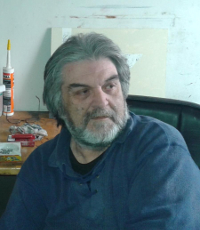 Born on 18.10.1957 in Smoljan, Bulgaria. 1976 Graduation Art School in Kazanlak. Study until 1984 with Prof. Dobri Dobrev at the University of Art in Sofia. His significant success begins immediately after his study. Prticipation in all national exhibitions in Silistra, Rousse, Gabrovo, Veliko Tarnov, Plovdiv, Sofi, Sliven and many others.

Regular participation in many regional exhibitions.

Organizer of 21 naitonal and international Pleinairs for painting. Illustrator of more than 40 books, under which autors such as William Meredith, Usin Kerim, Damyan Damyanov, Nadejda Zaharieva, Ivan Radoev . The love to the written word  and the deep understanding of it bring him tot he decision to establish the Magazin for Literature and Culture Progled , together with the poet Gantscho Keretschev (1993-2010).

Participaton on the draft of the law for the cultural heritage of Bulgaria. Director of the Art Gallery Smoljan (2005-2014).