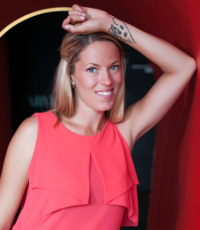 Laura Chaplin was born in 1987 as the daughter of Eugene Chaplin, Charlie and Oona Chaplin's fifth son. She grew up in the house that Charlie Chaplin had bought in 1952: "Le Manoir de Ban" at Corsier-sur-Vevey on Lake Geneva. Charlie Chaplin lived there until his death and was also omnipresent. His humanism, his creativity, his love for the people, his devotion to the circus and above all to clowns were visible and palpable throughout the house and have influenced Laura since she was a child.

Even as a child, Laura knew that she wanted to become an artist. She painted daily and sold her pictures to many of the celebrity guests who visited the Manoir. A highlight of her childhood was a visit by Michael Jackson, who one day landed with a helicopter in the park of the villa. Laura and Michael had a common favorite song - the world hit "Smile" composed by Charlie Chaplin - and became friends.

From the age of eleven, Laura attended a boarding school in England. At thirteen she already earned her own money as a model for Tommy Hilfiger, Seven Jeans and for numerous magazines. At the age of nineteen she worked as a TV presenter, before finally returning to Switzerland to study fashion and design in Lausanne. Her passion is still painting. Her pictures have been shown in Hong Kong, Brazil and the USA.

In her capacity as ambassador for "Moi pour toit", an organization dedicated to street children in Colombia, she visited Bogota several times and organized painting classes for children.

Laura has been aware of the fact that it makes happy to make others laugh and even laugh. Therefore, she is concerned about the serious faces of people in the Paris metro and the London subway, noting that in our world today too little is laughed or even smiled. Not only does laughter and humor improve our living together, it also helps everyone to stay healthy and overcome illnesses. There are many examples of how laughing is the strongest medicine. Laughter is also a powerful weapon against dictators and religious fanatics. Therefore, past and present there are many examples of laughing prohibition and punishment for people who made and make others laugh.

Laura Chaplin has studied the life and work of her grandfather and the phenomenon of laughter. The most bizarre details, most interesting expert opinions and funniest anecdotes of members of the Chaplin family, Hollywood stars, laughter researchers and of course clowns she has put together with her editorial team in her book: "Laughter is the first step to happiness"