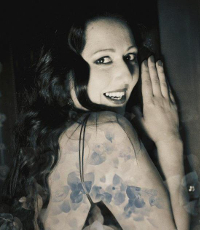 Militsa Gladnishka belongs to the very popular actresses in Bulgaria in recent years. Theatrical and musical stages are part of her artistic career, as well as various TV productions, films, etc. She has been connected with music since being a child, thanks to her mother, who is among the few women trumpeters in Bulgaria. Militsa plays the piano and sings and her childhood dream was to become an opera singer. But the love for theater prevailed and so she graduated from the National Academy of Theater and Film Arts "Krastyo Sarafov" with a degree in Puppet Theater.

In parallel, she studied opera singing with Reni Penkova. So far, Milica Gladnishka has worked in several television productions: "Condominium", "Like two drops of water", "Sing or lie", "Lords of the air" and more.

Milica works with the best jazz musicians in the Balkans and has performed with Lyubo Denev, Angel Zaberski, Vasil Spasov, Ventsislav Blagoev, as well as with the Michael Yosifov Sextet, Antoni Donchev and the BNR Big Band. She has participated in programs of the Pleven Philharmonic Orchestra, the Plovdiv Opera, the Burgas Opera, the Stara Zagora Opera, the Rousse Philharmonic. On the theatrical stage, Milica participated in "Titanic" - a musical standup performance, "Escapes", "Marriage Madness" and "Sex for the First Time". In addition, the actress also made movies for the small and large screen.

In 2017 Milica was awarded the Golden Feather Award by Classic FM, Cantus Firmus and the Makta Gallery for contributing to the culture of Bulgaria. In 2016, she received the Lyubimets 13 Actor Award at a ceremony at the Dimitrovgrad Theater together with Marius Kurkinsky, Yosif Sarchadzhiev and other wonderful artists of ours in the Other Actor category in recognition of her work as an actress, singer and composer. The same year, she was nominated for "Askeer" in the category "Theater Music" for the author's music and atmospheres in the play "Escape" by Veselka Kuncheva. In 2012, Milica was selected as "Woman of the Year" in the "Television Actress" category.