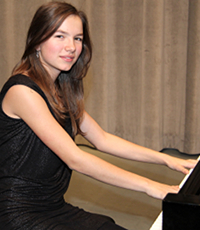 Theresa Kropfitsch, born in December 1998, started playing the piano with her father at the age of four. After passing the entrance exam at the University of Music, Vienna, she was a student in the class of Prof. Elisabeth Dvorak-Weisshaar. After Prof. Weisshaar's retirement she moved to Konversatory Vienna University and became a student in the class of Prof. Thomas Kreuzberger. In 2011 she again played the entrance exam at the University of Music, Vienna and started studying with Prof. Wolfgang Watzinger. Theresa has won several prizes in the national competition "prima la musica" and was winner of the first international Bela Bartok competition. She performs regularly, e.g. in Austria Centre Vienna, in Wiener Hofburg, in the City Hall Vienna, in the summer concerts of Jess-Trio-Vienna in Mürzzuschlag, in the culture centre of the 10th Viennese district, in the opening concert of the Chopin Festival Gaming (2012) or in Germany for the Hannover Chopin Society. In April 2012 she had her debut as a soloist playing Schubert's 23rd psalm for choir and piano solo in the great hall of Konzerthaus Vienna. At the moment she mainly concentrates on playing duos together with her brother David or trio with her brother and sister. She has not only played her father's "Trio für die Jugend" for several times but also Haydn's Trio "al Ongerese" in Brahms Hall / Musikverein in May 2015.