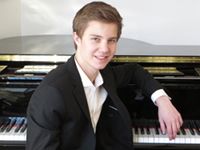 Felix was born in Vienna in 1997 and startet with piano lessons at the Vienna Boys‘ Choir at the age of seven. 2006 he became a student of Prof. Reinhard Amon. From 2008 to 2013 he studied with Prof. Peter Efler at the University of Music an Performing Arts in Vienna. Since 2014 he is member of the class of Prof. Johannes Kropfitsch at the Konservatorium Wien City of Vienna University.

Since 2012 he plays in solo concertos with the Franz Schmidt Chamber Orchestra. 2013 and 2014 he performed piano recitals Piano Recitals in Kottingbrunn Castle. He is ongoinly participating in Chamber Concerts.

In 2012 Felix won the 1st Prize winner of the INÖK Competition for Contemporary Music. He was awarded with numerous prizes in Prima-la-Musica National Music Competitions.

To complement his musical education, Felix attends the Secondary School for Music Students, in Vienna.