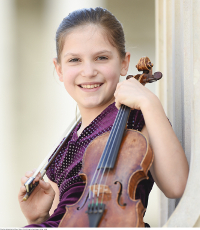 Allegra was given her first violin – a 1/16th instrument – at the age of three. Within 18 months and having just won her first award in a musical competition, renowned Prof. Arkadij Winokurow took her on as one of his students.

In the following years, Allegra has won every “Prima La Musica”-competition she has entered with distinction – both as a soloist and in different chamber music ensembles.

She has performed with the Ambassade Orchestra and received highest praises from the audience as well as the press. As part of the Bregenz Festival, Allegra participates every year with a growing ensemble of (Jazz) musicians as both lead singer and solo violinist.

Her repertoire ranges from Haydn and Paganini to Monti, Kreisler all the way to the great jazz standards, which she embellishes with both instrumental improvisations as well as vocal skat singing.