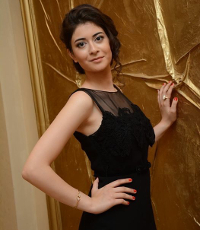 Marziya Guseynova was born on 24 July 1988 in Baku, Azerbaijan. Marziya is originally from the Republic of Dagestan, Russia. She graduated from a school named "Bul-Bul "where she studied vocal. Since 2012, she participated in international competitions which took place in Estonia, Latvia and Russia where she got prize-winning places. Marziya also took part in many public concerts. During her studies at the vocal school, she also began to practice saxophone. Since 2015 she attends the Vienna Conservatorium Music and Art Private University in Vienna. At the moment she studies in the class of professor Uta Schwabe.

2012 – 2. Prize Seventh international competition of the academic vocal for children and youth in Kohtla-Järve, Estonia

2012 - 1. Prize   2. International competition of young singer's  for the prize of Olga Sosnovskaya in Komi, Russia