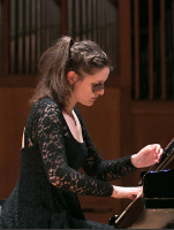 Maria-Desislava Stoycheva was born on 2. July 1997 in Plovdiv, Bulgaria. First piano lesson with 4 years. 2004-2014 she attended the Music School „Dobrin Petkov“ in Plovdiv in the class of Elena Velcheva. Since 2013 she studies at the New Bulgarian University in Sofia in the class of Ludmil Angelov. She participates on many master classes among musicians as Ljudmil Angelov, Ivan Drenikov, Borislava Taneva,  Dmitri Ratzer, Milena Mollova, Viktor Tschutschkov, Atanas Kurtev, Tamara Poddubnaya, Stela Dimitrova-Maistorova, Stefka Perifanova, Vladimir Valjarevic, Aglika Genova und Ljuben Dimitrov. She takes part in concerts dirung Music festivals such as Sofia Music Weeks (Bulgaria Hall) and March Music Days in Rousse. 2015 she played as a Soloist of the Varna Philharmony an dof the Shoumen Orchestra for the Easter Music Festival. She was chosen as a participant and recieved a scholarship for the 17th Course for Chamber Music „Musica Mundi“ in Belgium (Sommer 2015). Performance for the Concer tof young Talents in Sofia fort he 5th Festival „Piano extravaganza“. She got a scholarship for highly gifted students of the Association „Komunitas“ and is a member of the Club „The succesful Children of Bulgaria“ oft he Association Dimitar Berbatov.

She won a  range of prizes from national and international competitions:

2. Prize National Competition for best performance of a bulgarian piece

2. Prize International Competition for pianists in Nis, Serbien (no 1. Prize)

1. Prize XXIV. International Competition for young musicicans Cittá di Barletta – and a special prize for best performance  of a piece from the country oft he participant