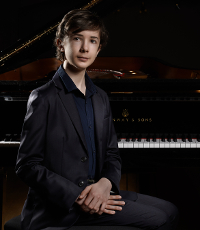 Martin Chudada was born on 27 of April 2001 in Zilina. He showed already i his early childhood an interest fort he world of sounds and tunes. With 5 years he started to practice the flute, with 6 years he began with the piano lessons in the Fero Špáni National School of Art in Zilina. He went ahead very fast and was accepted already in 2009 as a highly talented student at the Conservatorium in Zilina in the class of Darina Švárna. Since 2014 he lives in Prag, where his artistic growth is supported from the excellent chech pianist and pedagogue Ivo Kahánek.

With 10 years he played his debut with the State Chamber Orchestra of Zilina with the Concerto in f moll form Bach under the conductor Leoš Svárovský. An year later he played the bach Concerto for 2 pianos in c moll. He performed also as a Soloist oft he State Philharmony Kosice under Theodor Kuchar.

In September 2015 he performed on the Bratislava Music Festival with the State Chamber Orchestra of Zilina. He presented himself with the Beethoven Piano Concerto Nr. 3 in c moll op.37 under Leoš Svárovský.

He improves his interpretation art as a participant of many master classes with personalities as Ivan Gajan, Eugen Indjič, Marián Lapšanský, Ivo Kahánek, Avendis Kouyoumdijan.

He received several times (2011, 2012, 2014, 2015) the scolarship of the Middleeuropean Association CEF and  Slovnaft, under the program  Talents of the New Europe.

He received prizes from many international competitions:

Since September 2014 he is a member of a chamber trio, which won the 1 Prize on the Internaitonal Competition Concertino Praga 2015.

In March 2015 he won the Competition oft he Slovak Conservatories as a participant from the Conservatorium in Zilina.